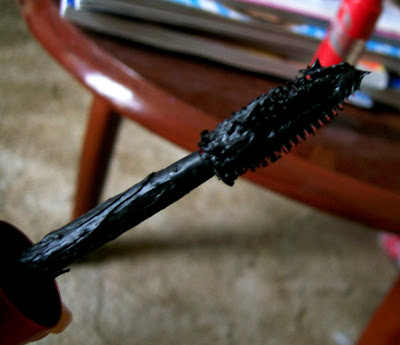 "Yuk, goopy. Are you really going to put that on?"
-A direct quote from my husband Tyler when I showed him the Double Twist Mascara wand.

Could the same company that brought us revolutionary products like Colorstay Foundation and incredible eyeliners also deliver something completely ineffective and difficult to use? Unfortunately my friends, the answer is yes. 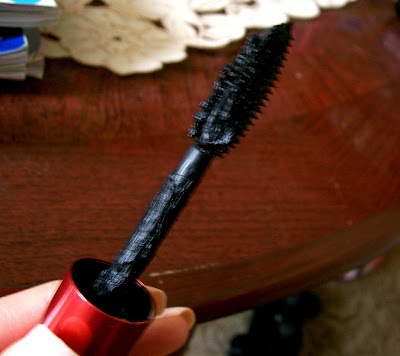 In my opinion, Revlon made a big mistake with its Double Twist mascara. As one who enjoys the rubber brush mascaras for their precision, and traditional mascara brushes for their volume- I thought this would be the best of both worlds- a mascara wand that incorporates both rubber bristles and traditional bristles... claiming to give you all the advantages of both varieities. I trotted up to the checkout at my local Walgreens so hopeful... but ended up really disappointed.
..........
Double Twist comes in a short stocky, overall cute red tube. The brush is tapered at the tip, and also where it connects on to the wand. As you can probably see from the pictures, it's that tapered area near the wand that ends up with an incredible amount of mascara buildup. In any mascara, there is a mechanism inside that basically cleans off the mascara wand as you pull it out. In my experience- sometimes they pull off far too much of the product... but with this- I felt like it wasn't doing anything. Not only the brush, but the wand itself had an excess of product- most wands I use come out totally clean. In the picture below- you can see that you're left with a large amount of goop to contend with right at the mouth of the tube. Yeah that's real fun to mess with after a frustrating application process. 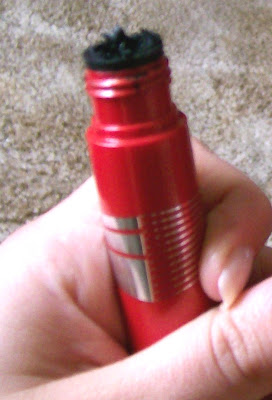 So how can you get a decent application with this stuff? Well you can wipe off the excess product with a tissue, then very slowly and carefully apply it to your lashes, then take a separate lash comb to take away the clumps... but who has time for all those steps every single morning? It was so hard for me to get this on my lashes without depositing tons of product. After my best attempt, my lashes looked thick alright- but also incredibly weighed down. The curl was gone and they were just kind of there. Obviously thick, and not cute.

It's important to note that in a previous question of the week (which had gotten around 900 reponses) the vast majority of those who answered said the biggest flaw a mascara can have is being clumpy. So therefore- resist the urge to pickup this pretty red tube of mascara. If you're in the market for a nice drugstore mascara try L'oreal HIP, CoverGirl Volume Exact, or L'oreal Lash Out to name a few.

Thanks for stopping by the blog, and have a great day!