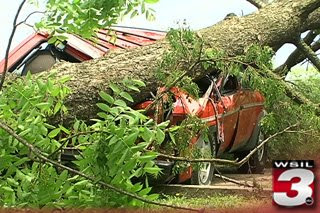 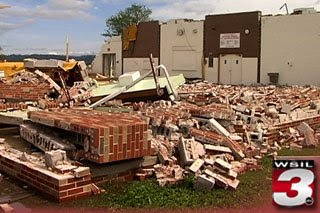 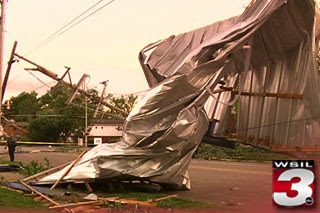 (photos courtesy http://www.wsiltv.com/, WSIL is the TV station where I work)
Hey everyone- Not sure how many people know about this- but this past Friday a HUGE storm rolled through my region- leaving a lot of destruction in it's path. It has knocked out power to thousands and I am still without power myself in my apartment, so I'm writing this blog at work (had a few minutes of down-time :) Fortunately the lack of power is the only thing I have to complain about- there was no damage to my apartment, vehicles, etc. But as you can see through the pictures I posted- there was a lot of widespread damage throughout the region. I've never seen so many trees uprooted, falling on homes and vehicles. We have been happy to report- there was only one fatality caused by this horrible storm. Some people are referring to it as an "inland hurricane" due to the 100+ mile per hour winds and the pattern it resembled on radar... however out chief meteorologist insists it's not a hurricane (they have to form over water), but rather it was a "macroburst", a widespread storm with very high sustained winds.
***********
When the storm happened- I was actually on my way to my sister-in-laws graduation several hours north of where I live. We barely made it 15 miles before we were caught in the storm, and had to rush into a restaurant- debris was blowing everywhere- it is definitely my scariest storm situation so far in my life. Once we were able to get back on the road, we saw semi trucks on their side, huge trees blown onto the interstate, and many damaged buildings.
*****************
After spending a day or so in Charleston, it was time to head back and see what damage was waiting for us in Carbondale. (that was Saturday). We've been without power for days now, and it's been so hard to get ready for work. As you know, I anchor a morning newscast- so it's obviously going to be dark outside... but with now power I can barely see what I'm doing to get ready. I have to basically light a bunch of candles and try to not light myself on fire while I use hairspray.
************
On Monday I thought I'd just be able to do a little getting ready at home- and I'd be able to finish at the TV station, since a generator keeps the building running... So I toted my blow dryer, curling iron, and other stuff, and arrived early so I could get the process going... only to find that to conserve power, the only lights in the building being used were the studio lights (only to be tunred on a few minutes before the broadcast) and a few newsroom lights. No bathroom lights, no lights in the makeup area. What am I supposed to do? This probably sounds like a trivial problem, and it is, but when your show broadcasts to thousands of people, you kind of like to see yourself in the light first. I just thought you would be interested in this bit of info, since this is a beauty blog! :D
******************
Today (Wednesday) when I arrived at work- full power was restored at the station, but I'm still without power at home. I assure you that as soon as power is back- I'll be posting videos almost daily- just like before. I've got a Carrie Underwood 100 Most Beautiful people tutorial all ready to go! Thanks to everyone for bearing with me, and for the kind comments you've sent. I really appreciate it, and hope to be back up and running soon!
Have a great day!
♥Emily