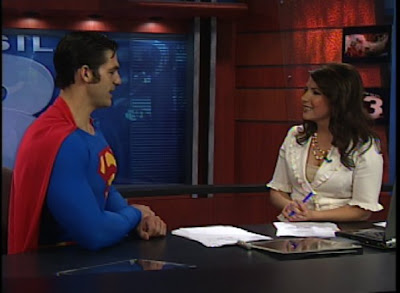 Hey everyone! On our morning newscast, I've interviewed a lot of different people... legislators, balloon makers, professors... even Santa Claus! But today, my task was interviewing none other than the man of steel himself... Superman! I was really excited, because it's not your typical interview. I mean, what do you ask him?

♥
He's the official superman for the Metropolis Superman Festival. Though it's a festival that's held in southern Illinois- it draws people from all over the country who're comic book fanatics. I've covered it for the news for the past two years and I've met dozens of people dressed all crazy like their favorite superhero. It's really fun, and it's going on this weekend.

♥
I asked him things like what his background was, what made him want to be Superman, what his workout secrets are- he's a big, really buff guy! His name is Josh and he's originally from Texas. He's a life-long athlete and has always loved Superman. The picture above really cracks me up because we're both sitting there as if he's not a guy dressed in head-to-toe spandex- we're both positioned like anyone would be for an interview! LOL. If you'd like to learn more about Josh and the Superman Celebration, check out the website: http://www.supermansupersite.com/2009celebration/superman.html
♥
Just wanted to share this random experience with you all! I know it's not makeup related, but it's cool! :D Have a great day!!
Emily
Email Post
Labels: About Emily