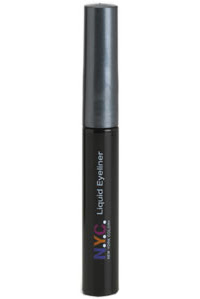 photo courtesy New York Color website- click pic to go there
Hey everyone! I know I mentioned this product as part of my Best/Worst of NYC video, but I thought it deserved even more explanation. I've been using this liquid liner ever since I ran out of my traditional Revlon Colorstay Liquid Eyeliner (which I swear by- I think it's awesome). But for less than 2 bucks, I decided to give this a try just to see if it could compare. I saw in a magazine that it was listed as one of Megan Fox's favorite beauty products, so I thought it just might work. And for me, it's awesome! So many liners I've tried have either not dried fast enough, have been too thin, irritated my eyelid, had a metallic finish, etc. This one actually gave me practically the same finish as Revlon Colorstay, but I think I like the longer applicator and brush tip even better. Seems to just go on faster and more smooth for some reason. Plus I paid about 5 bucks less for it!
♥
♥
I've been glad to hear from many of you recently-- in messages, emails, and on Facebook-- that some of you have gone from a self-proclaimed "makeup snob" to the realization that many drugstore makeup items can be awesome. It's not that you've given up on the high end brands that you're used to, but you've made room in your makeup world for less expensive stuff. This is one of those products I think you'll be really impressed with. Even though perhaps you don't hear about NYC on a lot of Editor's Favorites lists... or not a lot of your favorite YouTubers are talking about it- I think it's really worth a shot. I believe one day this product WILL be one of those legendary bargain products that has people baffled by it's quality/price. And if you don't like it as well as I do... you didn't even spend $2 on it! :)
**************************************
♥ Emily's Journal ♥
Hey everyone! It's journal time again. I hope you're doing great! Can you believe it's already September?? I try to live by the philosophy of really soaking up every day and not being too eager for time to fly, since you don't really know how much time you have. (I know, it's getting deep in here). But I admit, I've been eager for time to pass so Tyler can find out whether he passed his bar exam. He'll probably find out sometime in October. (In case you're not familiar- it's the huge test he had to take to become a licensed attorney). As you would imagine, applying for positions that require a licensed attorney is much easier when you can say you have that certification. So we're playing the waiting game.... thanks for those who've been offering kind thoughts and prayers! Tyler and I appreciate your support! What else is going on... oh we have some sort of problem going on with our air conditioner in our apartment. It's running fine, but there's some sort of leak happening- i think it's condensation- and it's gotten under our carpet in a couple places in just the last day or so, which is not a good thing. Been tending to that a lot and will have our landlord check it out and decide what to do tomorrow. Hmmm.... let's end this on a good note!! I LOVE the fan photos you guys have been post ing on the Beauty Broadcast facebook page! You're all so beautiful and I think it's fun to see what everyone looks like! Any pics you post automatically go into the "fan photos" album. Love seeing pets, family, etc!! :D You guys are the BEST! And here's the link in case you haven't visited: http://www.facebook.com/beautybroadcast
Have a great day!
♥
Emily :)
Email Post
Labels: About Emily Bargain Beauty Reviews