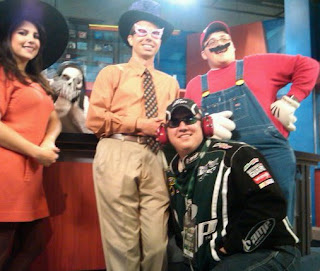 A portion of the News 3 This Morning crew after our Halloween Show.
Click here for the crew's entertaining Halloween JibJab video! :)
♥
Hey everyone! Happy Halloween! Often times we see "Share the Love" videos on YouTube, highlighting someone's favorite channels (I plan to do a video/blog about this sometime soon), but what first occurred to me, was how many of my morning newscast co-workers and friends have taken their interests and hobbies online in some way. Many of them were so helpful in getting the word out about the YouTube contest I'm in, so I want to return the favor. I'm lucky to work with such multi-talented people! From bluegrass to wrestling- chances are, you or your significant other might be interested in my co-workers online endeavors! :) 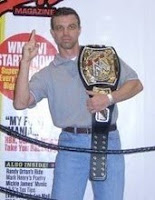 Kevin's Wrestling Write-ups!
Blog, Twitter
My co-anchor Kevin is a huge wrestling fan! He's been watching wrestling for 25+ years and his blog- "My 1-2-3 Cents" is packed with pictures, opinions, and past encounters with wrestlers. Since I've been on the morning show, he has booked several wrestler interviews, and they are always quite entertaining! I know a love for makeup and girly things has brought you to my blog, but if you like wrestling or have a boyfriend or husband that does, head on over to Kevin's blog! Tell him Emily sent you! :)

Ross the Racing Superfan!
YouTube, Blog, Facebook, Twitter
Ross is an associate producer and "Racing Superfan" on News 3 This Morning! He does segments pertaining to local racing and/or Nascar 2 times a week. It's definitely his passion! He has a YouTube channel showing his segments and additional video (Ross has applied to become a YouTube partner!), and he also has a brand new blog! He also updates a special Racing Superfan racing page. Whether you're a Nascar fan or a racing novice- you can learn a lot from Ross! 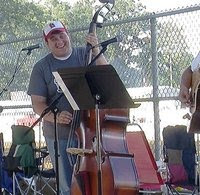 Weston's Bluegrass Band!
Website, Facebook
Not only does he work the craziest hours of us all, but he also performs in his bluegrass band, Beaucoup Creek! Weston's group has been together since August of 2007. Their music is described as a mixture of traditional bluegrass, folk, and gospel with a modern twist. The band has a nice website, along with a Facebook page to keep their fans updated! There's also a neat feature on the Facebook page where you can sample the band's music. Nicely done, Weston & friends! :) 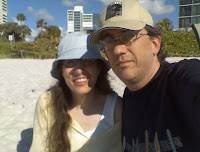 Scott & Laura's Economic Insight
YouTube, Blog, Twitter
Scott is an associate producer on the morning show, and he and his wife have recently developed several online offerings that pertain to precious metals and the economy. Laura is a copywriter, journalist, and precious metals investor. I had a great chat with Laura last week... she's developing a lot of the content and Scott uses his editing skills on the video side. This channel is in its early stages, but has lots of useful info. If you want to learn more about gold and silver, check it out!
♥
Hope you have a wonderful week!
Emily
Email Post