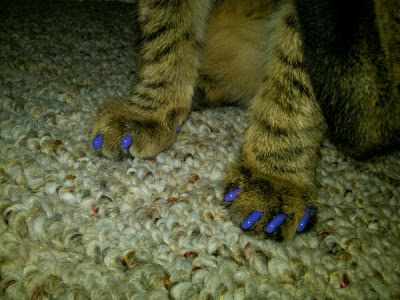 Hi everyone! You all know I'm all about the girly things in life... but no, I didn't paint my cats claws. She's wearing a product called Soft Paws, an alternative to declawing, recommended by my veterinarian.
Soon after we got Cupcake, she got purple ones, and now she has them in pink. Yes, they're cute, but that wasn't why I got them. You see, months before we adopted Cupcake from the shelter, we bought a new house... and quite a bit of new furniture to go inside. An expensive leather sectional is something I don't want to get damaged, as it would cost too much to replace! My vet said Soft Paws would be a good thing to try. They aren't permanent, but might lessen a cat's tendency to claw.

I've received lots of questions on Twitter about the Soft Paws- so I thought I'd answer those that involve my personal experience with them, and let the Soft Paws website do the rest. The site also has a pretty extensive "Frequently Asked Questions" section that may help you, if this is something you're considering for your pet. They are something anyone can purchase online & apply themselves, however my vet happens to offer the service too. 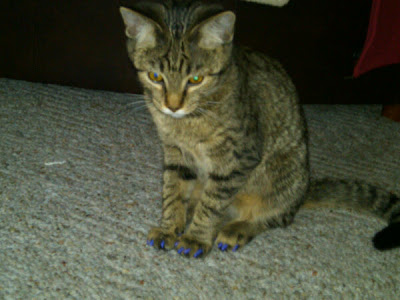 One day when I was taking Cupcake in for some shots, I also got Soft Paws done. First the vet clipped her nails. Then they applied Soft Paws with a glue that's pretty much like glue used for artificial nails. It took about 10 minutes... one person held Cupcake while the other applied the hollow tips (glue on the tip, and then put it on cupcake, and held it there so it would stay- much like fake nails except it surrounds the claw). Soft Paws come in a variety of colors & sizes to fit your pet (dogs can wear them too). My vet charged $10 for the Soft Paws, and $10 for the application. They're $18.95 on the website.

Cupcake walked around for a bit, probably thinking... what's on my claws!? She did a lot of licking on her claws (probably getting rid of any glue residue). Soon after you get these done, I recommend giving your cat something to eat... So the Soft Paws can continue to dry. Soft Paws are supposed to last for about 4 to 6 weeks. I believe this will vary, depending on how much you cat messes with them (and depending on your cat's nail growth). It's very likely a few may come off sooner. Cupcake did lose a couple before her 4 weeks were up. But as I said, these aren't permanent, so it's to be expected. I can re-apply them myself if I want, or wait for the vet to do it at a future visit. Whoever applies them really needs to use the same principles for applying glue-on nails-- make sure they have the right fit (kitten, small, medium, large) and press & hold them on. 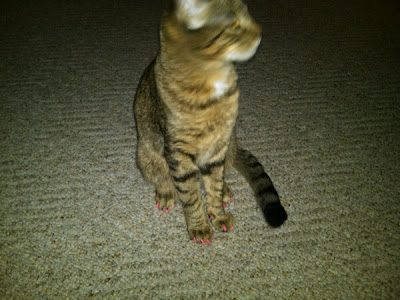 When Cupcake's Soft Paws are on all of her front & back claws, she can't scratch my leather couch. She can have full access to the couch, running and bouncing around- and she won't leave a mark. Does she love having these put on? No. Does she mess with her claws, trying to get the Soft Paws off? Sometimes. Has it caused her to act differently overall? No. She's still VERY playful and still has all her usual habits. So, as with almost everything, there are pros and cons. I'm not sure how long I'll continue to do Soft Paws, but someone at the Vet's office told me that after her cats used these for several months, it lessened their tendency to claw. I'll keep you posted on that!

Overall, I think these are a pretty good alternative to declawing. They're not perfect, but there are also advantages to the fact that they're not permanent- perhaps Cupcake eventually won't want to scratch, and won't need anything on her claws to keep her from it. I like that the claws & glue are non toxic, and are a much less traumatic experience than de-clawing. As I said, if this is something you might be interested in, there is much more information on the Soft Paws website.

Thanks for stopping by, and have a great day!