Hello everyone! I'm very disappointed in myself. I missed 2 DAYS of my Non-Stop November blog posts! I do have a reason though... starting Wednesday, this week got really weird. This first part of the story wasn't so much stressful, as it was bizarre. First off, we have a new segment this month on the morning show called "Wild Wednesday" where we feature a viewer's unusual animal. We've had an owl, a camel, and this week... a llama! 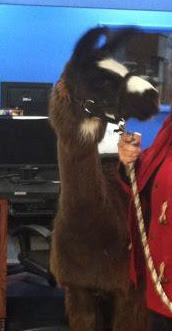 Llama Drama
I must say, I love llamas. So when this llama appeared in our newsroom- right off to the side of our set, patiently waiting with its owner... I was overcome with how cute she was! Then things got ugly. After about 5 minutes, while my co-anchor Kevin & I were anchoring... we hear the tell-tale sound of a stream of liquid hitting the floor. Yep. The llama went #1 and #2 right by my desk in the newsroom. (still anchoring) I hear the handler hustle the llama into the hallway... then we hear a major crashing sound... as if the llama kicked a hole in the wall or something (still reading news).
Ok... now we're in a commercial break- and it's almost showtime for the llama! We quickly get off of our massive desk on wheels- slide it out of the way- and prep the floor for the llama... um... where's the llama? Turns out that big noise we heard was the llama slipping and falling in its own #1 and #2 mess that it continued to make once the handler took it into the hallway. 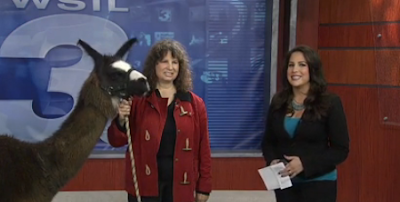 With about a minute to spare, the handler, Dayle, gets the llama on the set, tells me about the mess, and explains why the llama is dripping wet. Gross. Fortunately, she said the llama wasn't hurt when she fell. We ended up making it through the interview with no messes.... and Kevin and our producer Weston were already in the hallway trying to clean things up- bless their hearts. I'll spare you the picture, but it was a big mess. During that next commercial break, all we could do was laugh. I mean... who could've imagined we'd be dealing with a llama mess at the TV station. Even our news director was cracking up. It'll go down in history as one of the most unusual days on the morning show.
Anchoring AM and PM
Now to the real reason why I wasn't able to find time for blogging the past couple of days. One of our evening anchors had a death in the family, so our news director asked if I could do the 5pm in addition to the morning show Wednesday and Thursday. What's another half hour of news? I said sure... and it really wasn't a super big deal. I just had to go home after the morning show and come back in the afternoon. And keep my 2am makeup job looking fresh at 5pm (possibly the biggest challenge). Anyway, Wednesday... after the llama drama... I went home, then came back, anchored the 5pm, and came home... almost immediately noticing migraine symptoms. My vision was getting blurry and rather than blogging, I had to take my migraine pill and get to bed immediately in hopes of getting up for the morning show in a matter of hours. Thank goodness, the combo of sleep and medication left me feeling only mildly bad Thursday morning... and I again did am show, pm show, and then turned around this morning for the am show. The whole time period pretty much ran together. I was glad to be able to fill in... but could've done without the migraine.
TGIF 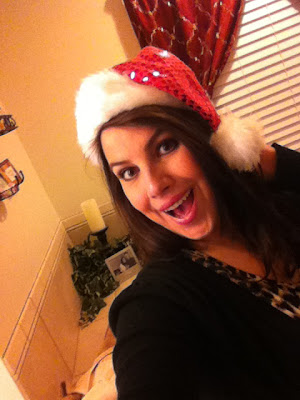 Needless to say, I'm glad it's Friday. After a quick meal at Steak & Shake, Tyler and I went to Walgreens, where I purchased stuff I didn't need. I call it retail therapy after a rough week. I picked up this lovely pink sequined santa hat... 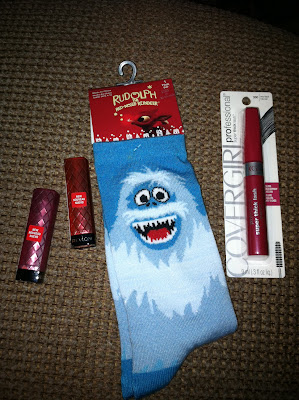 As well as these INSANE socks! Apparently that's a character from Rudolph? I don't even remember. All I know is I'll be seeing my sister tomorrow and I know she's going to completely crack up when she sees these socks. I couldn't even glance at them in the checkout without laughing. When I finally paid for this stuff, the cashier goes, "looks like you're getting in the holiday spirit." Um, yeah! I also got 2 more lip butters (Raspberry Pie and Cherry Tart)- Lord knows I don't need more lip products... and I got Cover Girl Super Thick Lash mascara simply because it caught my eye and I haven't tried it in ages.
♥
Anyway, these stories were probably longer & more drawn out than anyone wanted to read, but that was my wacky few days! Hope everyone has a great weekend!
Email Post
Labels: Beauty Broadcast on Facebook Hauls