Hey friends! Hope you're having a good week! I'm still dealing with a cold, but all things considered, I'm ok! I wanted to write a quick blog on something I know I've mentioned before... but I thought it deserved more explanation. I think we've all tried foundations that weren't quite right for us. A common scenario for me is that I'll love the look of a foundation when I first put it on, but then it looks not so good by the end of the day. For the news, I need both coverage and staying power... and there's a certain foundation that can give me just that! 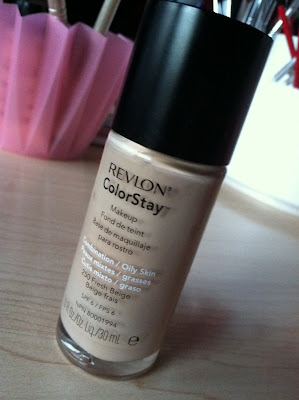 Revlon Colorstay foundation is regarded by many as a very long-wearing formula. It comes in two varieties depending on your skin type... Normal/Dry or Combination/Oily (my type). Sometimes if I wear this foundation alone, it can feel a bit thick, so I counteract that by applying it with a damp makeup sponge. The result is a really long-wearing foundation that keeps oil around my t-zone at bay. Lately, one of my FAVORITE ways to wear this foundation is in combination with other foundations that I've found to be less than long-wearing. Not only am I improving staying power, but I'm getting use out of products I initially thought weren't so great! I'll do it in one of two ways...
In case you were wondering, a few of the foundations I've successfully used with Colorstay include...
In some cases, these are foundations that don't have very good staying power or coverage, but in terms of Revlon PhotoReady and Neutrogena Healthy Skin... I think these are good foundations on their own, but I like how they balance out Colorstay. The end result with all of these combos is a look that keeps looking fresh at the end of my work day. Thanks for reading!
♥
Daily Nuggets...
Email Post
Labels: Bargain Beauty Tips and Tricks