Hey everyone! After getting to spend some time with my awesome sister Kelly a.k.a Pup over the Christmas holiday, I learned she has some strong opinions on a new skincare product- a dark spot corrector. It's something I've never tried, so I asked if she'd write up a guest blog... and she did! I'm so thankful to have a great sister like Pup, and if you'd also like to benefit from her awesomeness, I'd encourage you to follow her blog (about art, cooking, and more), and check out her website. You can tweet her, too. Take it away, Pup! 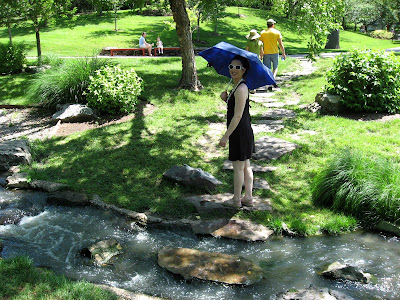 Photo of Pup and her "sunbrella" visiting the St. Louis botanical gardens.
Pup uses a sunbrella because she is hardcore.
Here's how alarmingly white I am: one summer day I walked into a store and saw a woman stage-whisper to her friend, "SHE'S SO WHITE!"
When I buy any kind of makeup where you've got to match it to your skin tone, I always pick the one all the way over on the left side, and it usually has an exciting name like Ivory or Fair.

Which is fine! I've made it my thing.
A few years ago, however, a few small tan blobs decided to crash my pale party. A shade or two darker than my normal skin tone, they appeared seemingly from out of nowhere, landing on the top of my cheekbones and later on my forehead and above my top lip. This was annoying, as I stay out of the sun and always use sunscreen. The last time I purposely tried to get a suntan was 1986. So maybe this was payback for some 1985 tanning incident. I'm not sure. But since then, I've attempted to get rid of the dark spots or at least tried to cover them up.

Nothing made them fade. Actually, it's not like I tried everything, because there are a lot of products out there claiming to solve this kind of problem. I used a couple of them for a while, saw zero spot reduction, got discouraged, and gave up. I became bitter--stupid lying beauty companies preying on women's insecurities!--and stopped buying them altogether. Because who needs another $22 jar of partially-used, worthless face cream rolling around in a drawer? Clearly nothing would ever make the brown spots go away, and I decided to stop wasting my money.
A couple of years passed with me silently hating the brown spots and dutifully dabbing concealer on them every morning.

Then a few months ago I wanted to be zombie Elizabeth Taylor for Halloween and stopped by a drugstore for some cosmetic supplies. While I was browsing the aisles, intimidated by the stupefying array of beauty products that my sister could undoubtedly navigate with ease, I came across Garnier's Skin Renew Dark Spot Corrector. It came in a hefty 1.7 ounce tube and cost around $15. Surrounded by other skincare products that cost almost twice as much, it kind of popped out at me. I thought of Garnier spokeswoman Sarah Jessica Parker, who always seemed to say Garnier's tag line "take care!" like she actually kind of meant it and never came across as someone actively out to rip me off. Since I was in a splurge-y,wacky, today-I'm-gonna-be-a-zombie! mood, I decided to give it a try. 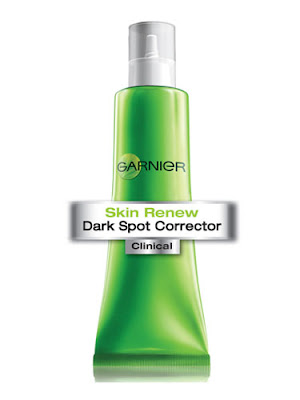 And it worked. It freaking worked!
I dabbed the pearly, semi-runny product, which has a mild citrus scent, on my cruddy little botches twice a day, and within four days I saw a noticeable improvement. Four days! The spots were fading, and a lot faster than the box claimed they would. It said [paraphrasing from foggy memory] that I should see improvement in about a month, and the spots should be gone in two months. It's two months later, and I'm still using the product but not as often as the spots are basically gone. I'm not sure they'll return if I stop using it altogether. I later learned that you're supposed to use the product all over your face, but...just dabbing it on the spots worked for me!
Before I wrote this review, I did a little Internet research and found that some people love this product and some people don't. So please know that while I was one of the lucky ones, you might not be. If so I'm sorry and I know how you feel. But if you try Garnier's Skin Renew Dark Spot Corrector, at least you're not going to be out $50 like you would be if you bought Clinique's new dark spot corrector. (It could very well work perfectly, but I'd never spend that kind of money on a questionable product that, heck, I just can't afford to buy in the first place.)

***** Five stars, Pup says check it out, although your mileage may vary.
♥
Thanks for the review, Pup! Have you tried this product? Feel free to share your experience with others in the comments section. Have a great day!
Email Post
Labels: Guest Blog Skincare Stuff