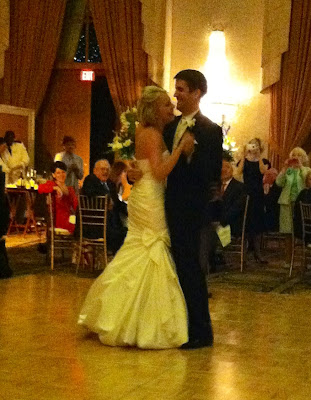 Hi everyone! I had a fantastic weekend- filled with traveling, friends, and lots of makeup! My friends Katie and Ryan got married at the beautiful Greenbrier in West Virginia. Katie grew up in a nearby town, and the whole area is charming & filled with tremendous mountains. I got to know both Katie and Ryan at WSIL (the TV station where I work)- Katie is a meteorologist and Ryan is a news reporter. My first time meeting Katie was actually during a hair/makeup freak-out she was having right after she started at the station & had gotten a new haircut! They are a perfect fit, and I was honored to be asked to do the makeup for the wedding! I did Katie's hair and makeup, along with makeup for 5 bridesmaids, and Katie & Ryan's mothers. Tyler spent all that time golfing :)
While I have done bridal makeup before (including my own), I have never done this many people at once- so it was definitely a new experience for me! It was really kind of an adrenaline rush... knowing that this would be one of the most photographed events of Katie's life, and of course I wanted to make sure the bridesmaids and mothers were looking and feeling their best as well! :) I wish I would've taken more pictures, but honestly, there wasn't any downtime & I was more concerned with getting my brushes clean & getting everything prepped for the next person. Like I said, it was a tight schedule! 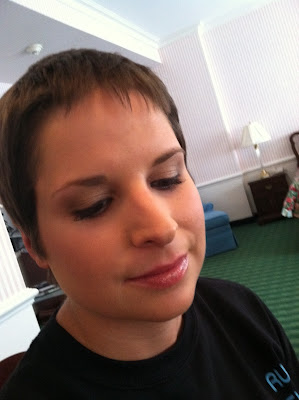 I did snap this photo of one of the bridesmaids, Sally. And I can't take credit for making her skin look perfect- it was naturally that way! :) But this shows the overall makeup theme that I used for all of the girls. The goal was flawless, photo-ready skin with a peach-toned blush... eyes were kept neutral- I used champagne, taupe, and brown colors in the Balm's Nude 'tude palette that I've been raving about. I did a shiny, peachy-pink lip on pretty much all of the girls- tarte Lip Surgence in Sweet was a great base. I had everything from dark brunette girls to light blondes... yet MAC's Cork eyeshadow proved to be a great brow touch-up product across the board. I was truly happy with the way all of the girls turned out- and the fact that they were already beautiful and beyond nice to me was definitely a bonus! They were all childhood friends of Katie's so I was really honored to have a hand in this. 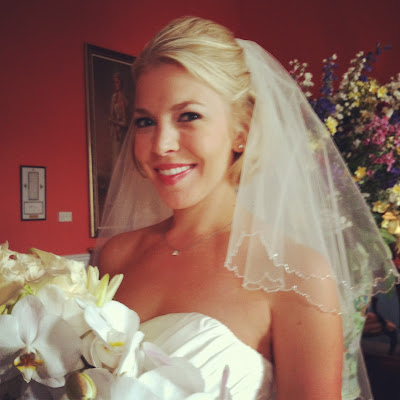 Katie was the last person on my agenda, and fortunately I have done her makeup quite a few times before! :) It was interesting, because right before doing Katie's makeup, I did her mother's makeup and they have the very same facial features, and the same personalities, for that matter. It doesn't show much in this last-minute pre-wedding pic that I took, but I did a subtle brownish/taupe outer V with the eyeshadow, and used MAC blush in Fleur Power for a bit of pink on the cheeks. I did a rosy pink lip that really brought her whole face to life, and major shoutout to Mally's Evercolor Automatic Waterproof eyeliner & Cover Girl Lash Blast Waterproof mascara! Katie shed some tears, but her eye look seemed totally untouched at the reception!! I was thrilled :) For her hair, I teased it up big time, then smoothed it and pinned half of it up. The veil was on a comb that I poked down over the bobbi pins. This was the part I was most concerned about... but it was almost too easy! With the help of a lot of Tresemme Tres Two hairspray- it lasted all night!
♥
Like I mentioned, I've never done makeup for this many people over the course of one afternoon, so I thought it might be helpful to me and others to sort of review how it all went...
What Worked...

What I'd do differently...

Well, that pretty much sums it up! Thanks for taking the time to read this! I have so much respect for the makeup artists out there who do tons of makeup like this on a regular basis. There are so many little details to think about, but it is truly fulfilling when a beautiful face is smiling back at you, excited about the way they look and feel! :)