Hey everyone! You may have already seen the announcement on Facebook, but I have a winner for the Lori Greiner makeup bag giveaway! Lina Dy was randomly selected as the winner, and she'll soon receive the lavender set of bags that she chose. In case you were wondering how she was chosen, the morning that the contest ended, I had Tyler choose a number between 1 and 838 (the amount of comments posted)- and he chose 467... that was Lina's comment. Thanks to all who entered and keep an eye out for future giveaways! :) 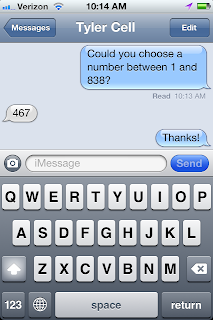 Also- just a little announcement about something I am probably way too excited about- but yesterday at CVS I found a cupcake print Turbie Twist! It's so cute. In case you're not familiar, Turbie Twists are these little towels you can wrap your hair up in after a shower, and they get rid of a lot of excess moisture. I always put one on after I get out of the shower- it works so much better than trying to balance a large bath towel on top of your head! It's nice to have several of them so you always have one while another one is being washed. I just thought this one was adorable!! 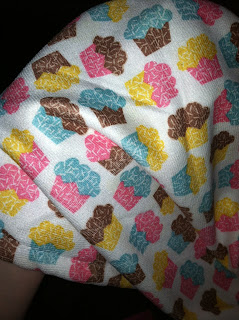 Lastly- I just want to say thank you. I sent out a tweet earlier today shortly after posting my latest video- the Too Faced 1 Brand tutorial... basically I was just voicing frustration over the comments section being especially brutal (not that there was anything vastly different about me in this video- I guess it all just kind of hit me at once)- with people criticizing my face, voice, length of the video, pregnancy speculation (I'm not), and the list goes on. So many people tweeted me some really kind feedback and I  just want to say thank you. And I can't say thank you enough to those who post really amazing comments on my YouTube videos on a regular basis- I'm not even sure I can communicate how much those comments mean to me, and how much those motivate me to keep creating videos. But when it comes to negativity, I almost always do what many of you say- "ignore the haters". It's good advice and I try to live by it! But I am human and occasionally negativity does get to me. As strong as I want to be, there are times when peoples' jabs really hurt.

I got to thinking- when it comes to those little comments like "her face is so annoying"... it seems like such a thoughtless thing to write. Much of the negativity that I see on YouTube (not just on my videos) seems like someone just had something mean pop into their head, and thanks to how easy it is to just post a comment- it's up for the world to see in a matter of seconds. Just that simple! I'd like to urge anyone participating in any format- Facebook, Twitter, YouTube- you name it... to just stop and think before you post. Ask yourself- could this be hurtful? Do I really want to hurt someone?

I'm not trying to get over-dramatic here, and I'm sure I'm preaching to the choir with this thought (lots of love for the blog readers out there!!)... but cyber-bullying is all over the place, and not everyone out there has a thick skin. With so many outlets for feedback in social media- why not try to inject a little positivity out there? Use that easy chance to comment to do something good with your thoughts- keep it productive, constructive, and just keep it kind. I often watch Ellen on TV and I love how she ends her shows with the comment- "Be kind to one another." That's what it all boils down to. As strong as we all aim to be, we're all human beings with feelings. Let's value everyone. Thank you!

Love to you all, and once again- thank you SO MUCH to those who make each day brighter with your support. It inspires me- not just to create videos about makeup- but to be a better person.