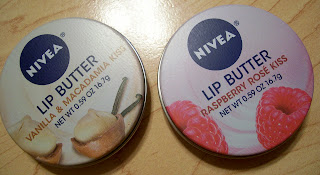 Hi everyone!
I was planning to blog about a bunch of new Milani lipsticks, but I needed to take a lot of pics of how they look on the lips, and it just got too dark and dreary here this afternoon. So I thought I'd just do a quick blog on a couple of new things that didn't require so many pictures and natural light. I found these Nivea Lip Butters this past weekend at Walgreens... there was a whole display of Nivea products (including men's stuff) that was Buy One Get One 50% off. Several of you told me I should check out these lip butters so I thought I'd give them a go! I think they were between 2 and 3 bucks each, but I also got the BOGO discount. 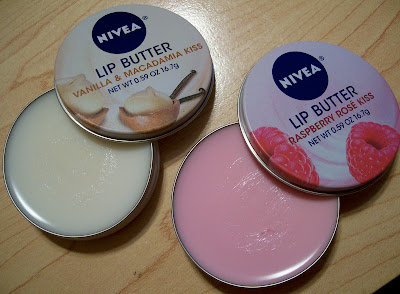 I believe there were four different kinds available... plain and caramel- and then the two I got which are Vanilla & Macadamia Kiss and Raspberry Rose Kiss. They come in sort of flat little tins and they smell AWESOME. The Vanilla and Macadamia has a really nice lightly sweet scent, and the Raspberry actually has a somewhat realistic raspberry scent. They don't give off any color, but they are incredibly hydrating. I've used a few different Nivea lip balms that come in the stick form over the years, and I've really liked them. I haven't yet tried using these as a hydrating base for lipsticks. Since they're so emollient I'm not sure if a lipstick would nicely cling to them like they do to EOS (which never feel quite as slick on the lips), but we'll see. Just wanted to give you a heads up on these if you're a Nivea lip product fan! So far I've only seen them on display at Walgreens.