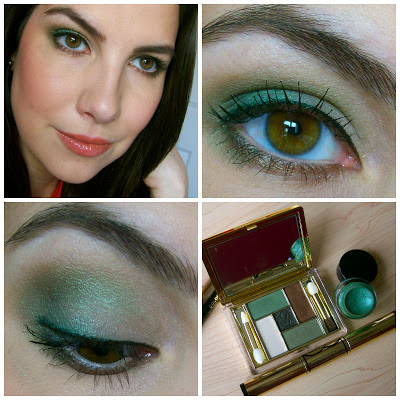 Hi everyone!
First off, I have a cold! It was probably at its worst over the weekend, but I feel like I'm on an up-swing today... though I don't sound like it. My voice is lower than Tyler's-- probably because I spent a lot of time talking over the weekend! We had a little get-together at my sister's, and our friend and makeup artist extraordinaire David Aikman was there! :) He works for Estee Lauder in New York. I first met him in person at IMATS, but this time we really had a chance to sit down and talk makeup. Words can't explain how great this was. He shared so much about his work, but we also talked drugstore makeup like there was no tomorrow, picking each other's brains about favorite products. Totally worth losing my voice over :) We also exchanged gifts-- David brought some INCREDIBLE products from prestige brands for Pup and I, including some Estee Lauder items that I experimented with today and will show in this post. To quote David, "Makeup is medicine." And I think it really was for me today! Nothing like some fresh colors on the eyes and lips to perk you up and make you feel better... despite what your sinuses are up to. You'll see more of David's influence in some future videos... for now, I want to tell you about this look! :) 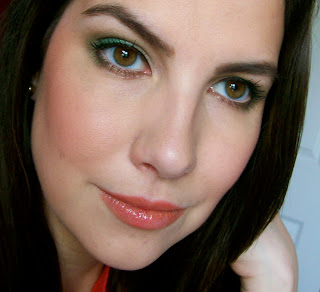 I'm wearing my Estee Lauder Double Wear foundation and concealer, and another key product for the face makeup is definitely the blush. I feel like it's really pretty with the orangey lip. 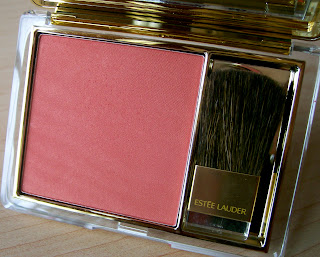 This is the Estee Lauder Pure Color Blush in Wild Sunset. GORGEOUS. I feel like it's coming off slightly more pink in this picture than it really is. It's a rich peach color with a bit of golden shimmer. I'm in love with this shade! 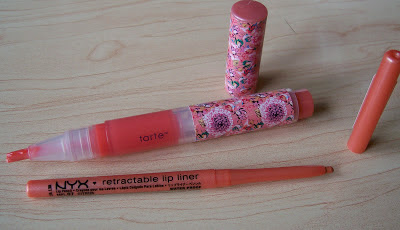 For lips, I'm wearing a couple of great items from my own stash- the NYX Waterproof Retractable Lip Liner in Citrus (incredible staying power!), and Tarte Maracuja Divine Shine Gloss in Blissful. 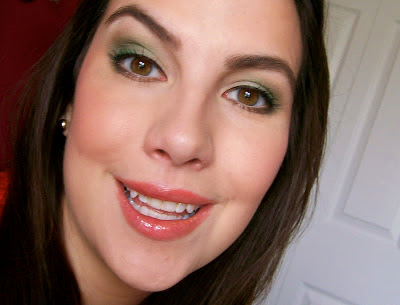 The result is a really shiny, coral lip that's actually has pretty good staying power. While the gloss is quite shiny, it's also somewhat sticky, which does enhance the way it wears on the lips. The eyes are what really excite me about this look! While I have a host of pretty olive green shades in my collection, this look is more of a "summer green" eye... it makes me think of grass. I like that it's bright, but not neon. It has some softness to it, and the subtle liner probably has something to do with that as well. 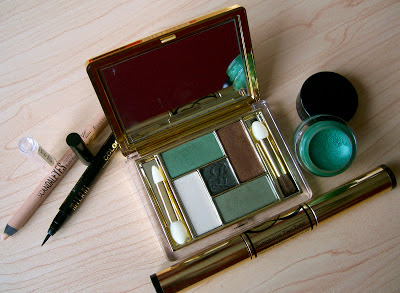 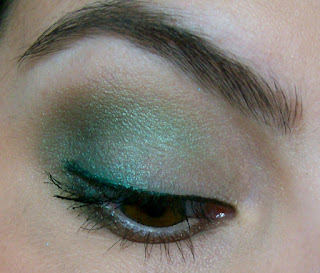 I used the matte cream shade around the inner corner and under the brow. I used the brightest green shade (at the top of the palette) on the rest of the lid and up into the crease. I added some of the darkest green to the outer corner, and lightly smudged it on the outer part of the lower lashline. Then I took the softer green at the bottom of the palette and lightly buffed out the edge of the look with this. I even took it in a "C" shape around the eye, going just underneath the lower lashline. I just wanted the eye to look like it was softly surrounded with the green. I used just a bit of the deep copper on the inner part of the lower lashline. These shades blended so easily, it was very simple to make it look "natural", even though these are not all neutral shades. 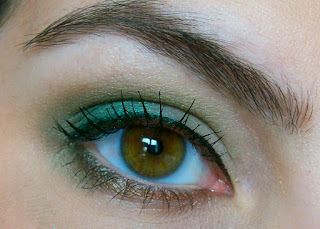 So where does that pretty green cream shadow come into play? David suggested using that on top of eyeshadow. So I dabbed it on the outer part of my lid to further intensify the green look. I LOVE how it adds pigment to the look, without having a sticky or overly moist feel. In fact, when I touch my lid, it feels totally smooth & dry. It has such a nice creamy texture, but it sets and has hardcore staying power. (I learned that when I couldn't wash the swatch off of my hand at first on Saturday :) I finished the look with a thin line of the black Milani liner pen on the upper lashline, and the Rimmel Scandal Eyes in Nude on the waterline. I added a coat of mascara to top and bottom lashes-- and this is the double-ended Estee Lauder mascara that is black for the upper lashes, and brown for the lower lashes.
♥

I hope you enjoy the look! And thank you so much to David for supplying me with some fun new Estee Lauder products. I really love these greens and will probably do a video on this kind of look at some point. David also inspired me to check out a whole bunch of drugstore things I never thought to try, so that's coming in a future video :)