Jordana 12hr Made to Last Eyeliners 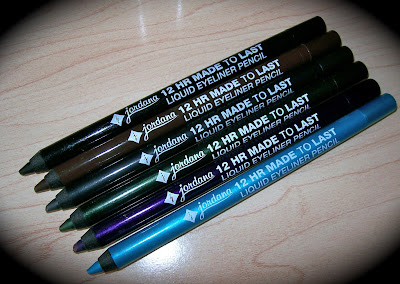 Hi everyone!
As promised, I'm sharing more new Jordana products! In a recent post I showed the brand's Made to Last Shadow Sticks, and now we're moving on to the liners! These were sent to me by the company to review. As I mentioned in my last Jordana post, Jordana and Milani are made by the same company. I found that the brands' shadow sticks were pretty much the same, and these Made to Last liners seem to work exactly like Milani's Liquid Eye pencils. Why take note of Jordana's? They're selling for $2.49 and Milani's are $6.99. I haven't tried each and every shade of Milani's, but they're offering 5 shades, and Jordana has 6. Judging by website pictures, they seem to be the same colors-- Jordana's line just added in a forest green. All of these liners go on VERY smooth and set to a budge-free state. You can rub on them all you want-- they won't move. Also, a lot of times the amount of hours a brand slaps on a product seems very exaggerated... but with these pencils- I've seen them go beyond 12 hours without a problem. That's impressive! Let's check out the colors... 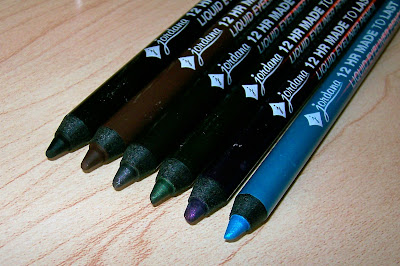 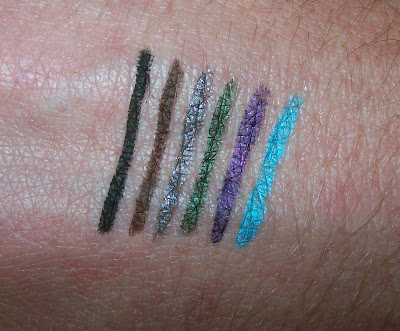 These are swatched in the same order they're shown above... as you can see, the black and brown are the only matte shades of the bunch. All of the other shades have shimmer or at least a somewhat metallic finish. 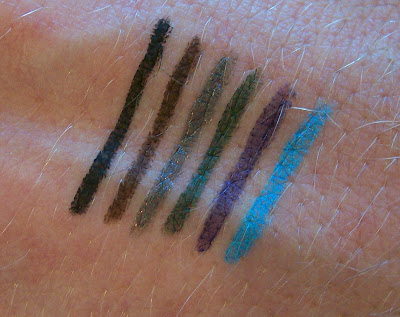 The top swatch pic was taken with a flash, and this one is without. I think the bright flash may have exaggerated the shine that some of these shades have, but as you can see here- there's still a decent amount of sparkle showing up in that charcoal shade. Personally, I love the brown and black (who doesn't need long-wearing liners in those shades?) and of the colors, I LOVE the purple. It's such a pretty deep plum. I give these liners two thumbs up and the price is awesome! Other types of liners comparable to these (besides Milani Liquid Eye) would be NYX Slide On Liners or Urban Decay 24/7 Liners. 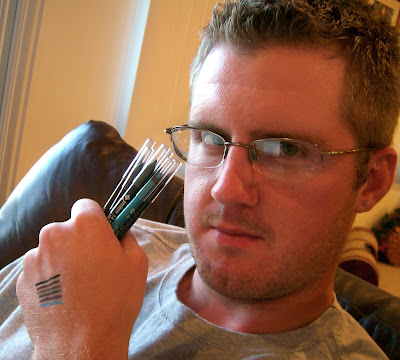 By the way, those are Tyler's paws that I've been swatching on today. I actually got a spray tan a little while ago, and I didn't want to mess with the way the tan was developing by swatching and then scrubbing on my skin. So Tyler let me borrow his hand while he watched the Cardinals game. I should've taken advantage of all of the space on his hand to draw some sort of illustration with these liners. But here he is trying to look fierce holding those liners and sporting some badass swatches :)
♥