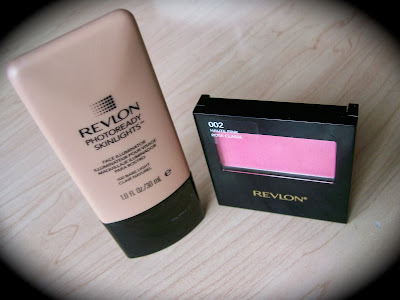 Hello friends!
During my last visit to Ulta, I noticed a couple of new Revlon displays! I'm kicking myself that I didn't take pictures of them, but thought I'd give you a heads up here on the blog. The first display was for Revlon Skinlights- that's an older product that is making a comeback! There was also a display with quite a few different blush colors, along with several bronzer/highlighter combos that reminded me of Physician's Formula Shimmer Strips or Bobbi Brown Shimmer Bricks. I picked up a couple of items that I'm trying out, and I'll make sure to review them for you soon! :) 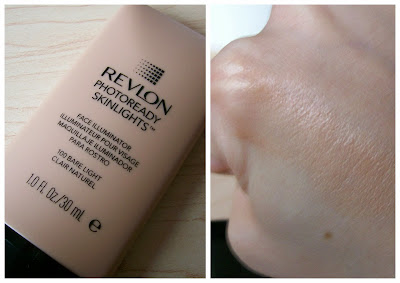 Skinlights are basically a liquid highlight type of product. They've been re-released as part of the "PhotoReady" line, and there are several shades available. I believe there was peach, pink and bronze... and the shade I got which is Bare Light. I struggled to get a good shot of the sheen that this product gives off- but the picture on the right is a partially sheered-out swatch. These Skinlights seem to provide a very subtle glow... they have a pearly finish without flecks of glitter. I could even see these being used as a primer, or as a highlight on top of your makeup look. I chose Bare Light because it seemed to be the most natural and I thought it would mesh well with my skin tone. I plan to do a full review on this once I've had a chance to experiment with it more! 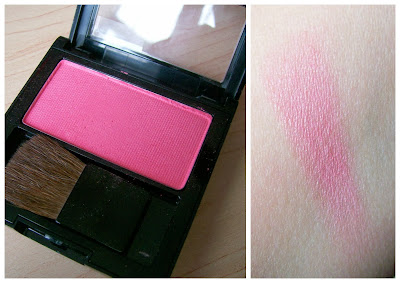 There was a really pretty selection of blushes in a separate display, and many of the colors seemed more vibrant that what Revlon usually has in their line. I opted for one of the brightest shades called Haute Pink to see just how much punch it really had. There is some shimmer in this blush, which I think tones down the overall color payoff. It's definitely a color that I'll use, but it doesn't strike me as anything vastly different from other drugstore blushes. Definitely not as impressive as the Coastal Scents blushes that I showed in this haul video!
♥

Just wanted to let you know that those new displays are out there, in case you're interested! Have you run across any other new drugstore products lately? Let me know! :)